6 Comments
By brisvegasvego Eating In

So I was asked to make red velvet macarons for a friend’s hen’s night. So yes, play dough penises and drinking games abounded. The problem was, I loaned my piping bag to someone so they could ice cupcakes. Instead, I make red velvet cookies. I found the link here, but I warn you, it’s very spammy so you’ll need to exit out of a lot of ads.

I really don’t get the appeal of adding FOUR tablespoons of synthetic dyes when without the dyes, you would have had a perfectly fine white chocolate cookie, but that’s just me I guess. I now have a bottle of red food dye. Perhaps a non-edible dying project is in order? 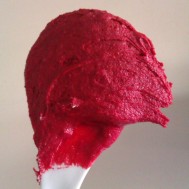 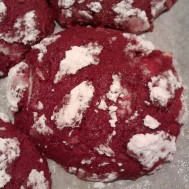 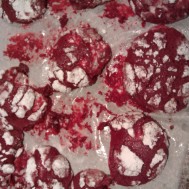 They turned out a little fugly (ok, a lot fugly, but I was taking them out of the oven 5 minutes before I had to be there- I was rushed!) but I was told they taste like Subway cookies.

Complement? I think it was intended as such.

Reply to this Cancel reply